Exchange 2010 hit the ground more secure than it’s predecessors in many ways; one of which was to enable RPC encryption on Outlook MAPI connections by default.  While Outlook 2007 and Outlook 2010 try to do this anyway, Outlook 2003 does not.

This caused a few of issues: 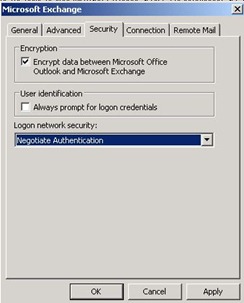 I believe the easiest way to fix this was with a simple Group Policy setting which enabled RPC encryption in Outlook.

However apparently this was too much for a number of Microsoft customers, and as such Microsoft disabled RPC encryption by default in Exchange 2010 SP1!

See for yourself here:

As the excerpt states, this isn’t an issue for upgrades, but if you plan to deploy new servers in an existing environment, or a new environment all together, you may wish to re-enable this setting on Exchange.

To see what your RPC encryption setting is, run the following command:

Then to enable the encryption requirement for all Client Access Servers:

One final note:  This setting is to determine weather Exchange requires encryption.  You’re still welcome to use it even though the setting not doesn’t mandate it.